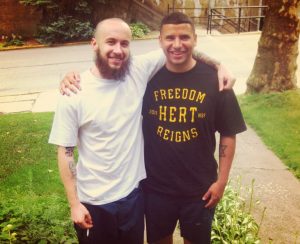 MF1, Daniel Montano, pictured on the right, has passed away at 30.

Possibly Pittsburgh’s most well known graffiti writer and a life long anarchist, MF1 had an absolutely unique and thoughtful style that even many who dislike graffiti had trouble not being inspired by. While he could certainly look intimidating, you’d be hard pressed to find anybody who knew Daniel who doesn’t describe him as warm, caring and joyful.

END_OF_DOCUMENT_TOKEN_TO_BE_REPLACED

UPDATE June 5: Top Squat residents report that there has been no further attempt to evict them. At this point it seems likely that the matter will end up in civil court. Stay tuned for further developments…

Earlier today a person showed up at Top Squat, Pittsburgh’s longest standing anarchist squat, claiming that he was related to the deceased former owner and that he would call the cops to have the house evicted. As of this writing the cops have not arrived, but the squat’s situation is highly precarious.

According to Top Squat residents contacted by Torchlight, the house is being more tightly secured, and pets and expensive items have been moved to friends’ houses. Pittsburgh ABC has released a statement  containing pertinent background information, but the immediate situation is not as dire as they imply. However, comrades should prepare to support Top Squat materially, financially, and if necessary physically.

Possible state responses include an immediate forcible eviction attempt, a long drawn out battle in housing court, and a host of possibilities in between. Watch this space for updates.

Our friends Maxx and Shea were released yesterday evening, after a month in Allegheny County Jail for protesting a Trump campaign appearance in Pittsburgh last year. As wonderful as it is to have them back, their legal difficulties are not over yet. They must still complete 11 months of probation and pay an estimated $1,400 each in prosecution costs. Please donate to help cover these expenses!

Pittsburgh activism has long and sordid history of cooptation by the police. Liberal organizers invariably honor a tacit agreement in which they guarantee that their “actions” generate minimal material disruption of the prevailing order, in exchange for the cops’ allowing them to proceed unimpeded. The police, notoriously lazy in Pittsburgh, benefit from protest organizers doing most of their work for them, plus they don’t have to tarnish their image by pepper spraying and arresting protesters. Organizers in turn get to boost turnout by offering a risk-free, conscience salving experience, while claiming success based on nothing more than seamless logistics, regardless of the lack of movement toward their claimed goals.

END_OF_DOCUMENT_TOKEN_TO_BE_REPLACED

On April 13th 2016, our friends Shea and Maxx were arrested for protesting then-candidate Trump outside a campaign rally at the David L Lawrence Convention Center in downtown Pittsburgh. Both were charged with felony aggravated assault, felony riot, and resisting arrest. Last week they were sentenced to 3 to 12 months in Allegheny County Jail, in addition to a year of probation, community service, and prosecution costs.

Maxx and Shea need your help! Prisoners at ACJ must pay out of pocket for decent food and other basic needs that people on the outside take for granted. In addition to this commissary money funds will be needed to cover prosecution costs and probation fees.

Please donate if you can! Even small amounts are much appreciated. We are also requesting folks to spread the word on social media, and in real life as well. Tell all your friends!