A local anarchist who has recently been involved in legal support sent us this compendium of repressive activities by law enforcement. It has been edited for spelling and grammar, and supporting links added, but is otherwise unchanged.

* The so-called Damage Assessment Accountability Task Force has been going through surveillance camera footage from protests in late May and early June, and arresting protesters for allegedly throwing things at the cops, looting stores, etc. Right now they are pretty narrowly focused on the protests that happened on May 30th and June 1st, but it’s not hard to imagine them expanding into a more general role in the future. So far they’ve arrested at least 20 people, most of whom were new to protesting and don’t have any connections in activist circles. We don’t know exactly which police forces are in DAAT, but news reports point to the FBI, ATF, and Pittsburgh police.

* Grand juries are hella sketch, especially federal grand juries. There is one at work in Pittsburgh that has already indicted three people. All of them were allegedly part of the same two protests being investigated by the DAAT, but federal grand juries last 18 months. If this one has just started up, it has plenty of time left to indulge in mission creep.

* The FBI has approached two activists that we know about. They also attempted to talk with several protesters arrested at the action on June 1st. We don’t know what the feds were able to learn from these interviews, but we have to assume they’re coordinating with the DAAT and the grand jury.

* An anarchist squat was recently evicted. As awful as this would have been on its own, there is reason to believe that the squat was targeted specifically for the politics of its residents. Several cops tried to get the squatters to talk about their beliefs, and an “intel unit” officer took pictures of the inside of the house and tried to get permission to take several zines with him. Even the building inspector called in to condemn the house was getting in on the act, by taking pictures of the license plates of cars coming to help people move.

* The Allegheny County district attorney has been trialing facial recognition technology from Clearview AI, a company founded by an alt-right grifter and spammer. While the DA doesn’t appear to have a current contract with Clearview, they’re obviously interested in the technology and might have just gone with a different supplier.

This report shows the backlash is well under way. DA Stephen Zappala pulled off a neat PR coup by charging 61 arrested protesters with misdemeanors – and then loudly announcing that he was dropping the charges for lack of evidence. This let him take credit for respecting protesters’ civil rights while dodging the flood of criticism that would have accompanied the prosecution of proverbial peaceful protesters for minor offenses. Now he gets to rack up felony prosecutions in relative peace, knowing Pittsburgh’s liberal activist groups won’t give him any shit as long as he’s only going after “violent looters”.

In the street, actions continue under the same old implicit bargain with the cops. Incredibly aggressive marshals scream at anyone deviating from the organizers’ script, undercover cops shadow every march taking pictures, and any possibility of militant action is snuffed out at birth. Multiple peaceful marches are taking place every week, which stretches police resources and forces them to spend money on overtime, but this is a very small consolation. The absence of state police and other outside reinforcements at recent protests indicates the Pittsburgh cops think they’re on top of the situation. It’s hard to argue with their assessment.

This pacification is reflected in the absolute denial of any concessions by local politicians. Unlike cities such as New York or Portland, where police departments have seen slight budget cuts and minor restrictions on their authority to use force, in Pittsburgh the police are getting more money. The 2020 operating budget grants them a 10% increase in funding. At the county level, the Allegheny county council refused to ban tear gas or even do mass coronavirus testing at the jail.

Alternative approaches to defunding the police abound. In Minneapolis, where resistance fighters burned down the third police precinct building, cops are resigning in droves. While they might just be taking advantage of their generous health benefits to retire early on disability pensions, the fact remains that they won’t be murdering unarmed Black people on the streets anymore. In Portland, police admit to $8 million and counting in overtime expenses from two months of riots, already over half the paltry budget cut imposed by the Portland city council.

We could go on, but you get the idea. Shrinking the Pittsburgh police is going to have to be a DIY effort. The sooner we start the better.

Skinhead nazis associated with Keystone United attempted to picket the Big Idea Bookstore and Cafe on Friday. Anarchists, friends of the Big Idea, and local residents quickly made it clear to them that they were not welcome in the neighborhood. Filler Distro has a detailed timeline of events.

Yesterday a caravan of almost 30 vehicles circulated downtown, demanding that Allegheny County Jail release prisoners, especially Black mothers, in light of the ongoing Covid19 pandemic. The action was organized by Dignity Act of PA. Protesters hung signs from their cars and honked as they circled the City-County Building beside the county courthouse. After about a half hour there, the caravan headed over to Allegheny County Jail, where they stopped in front until the cops ordered them to move and started handing out tickets. Organizers then held a press conference.

Corporate media coverage was typically sparse, again, in comparison to the flood of coverage given to the right-wing astroturfed “reopen” protests last month. Only City Paper and KDKA Radio reported on the caravan.

Inside the jail, little has changed. The jail’s oversight board recently voted not to do universal testing for coronavirus. Last week Chelsa Wagner, the county controller, wrote a blistering op-ed in the Post-Gazette calling out county executive Rich Fitzgerald for lack of transparency, and questioning the testing priorities of UPMC and county officials.

Currently, jail testing data indicates 28 out of 59 prisoners have tested positive, a 45% rate. This is actually lower than the 56% from a couple of weeks ago, raising the suspicion that the jail is manipulating the numbers downward somehow. Given the crowded conditions and the number of symptomatic individuals reported to be inside, it is very unlikely that the true positive rate is going down.

On May Day, an autonomous group of individuals carried out a series of banner drops in Pittsburgh in support of the 5 global demands. In this time of crisis, it is more important than ever that we prioritize the safety and well-being of our neighbors and communities over the profits of the owning class or a quick return to “normal.” Too many of us in Pittsburgh believe that the course of the response to this pandemic is out of our control, that we can only make the best of plans and actions handed down from on high by politicians, landlords, and business owners.

It does not have to be that way. With these banners, we are spreading awareness of the possibilities of collective action, hoping to foster the knowledge that we as people can make the decisions that will keep us and our people safe, housed, and secure despite the changes that the virus has made necessary. These problems are systemic, and our demands are inextricable from one another. We cannot have homes for all if we do not cancel rent, debt, and mortgage, or if prisoners are released without healthcare and homes to go to. Our power lies in our autonomy and our solidarity—together, we can all protect one another.

END_OF_DOCUMENT_TOKEN_TO_BE_REPLACED

Since this piece was written, coronavirus has spread rapidly in ACJ. As of April 28, 19 tests have returned positive out a total of 37. Even these numbers, horrifying as they are, reflect only a fraction of the number of infected prisoners. 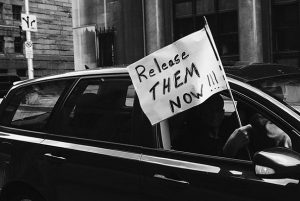 An analysis of Pittsburgh’s local jail amidst the coronavirus epidemic and a short report on ongoing abolitionist activity.

Over the past many weeks, community members in Pittsburgh have been organizing to demand the release of people who are in prisons, detention centers and jails in Pittsburgh and around the country. Between phone-zaps and demonstrations, we won’t stop until every cage is empty.

Autonomous groups have been organizing protests outside of the jail and the courthouse:

This coming week, organizers in Pittsburgh will also be holding a virtual abolitionist vigil and grief ritual for people all around the country. To find more information about joining an at-home vigil please follow @abolitionistvigil on Instagram.